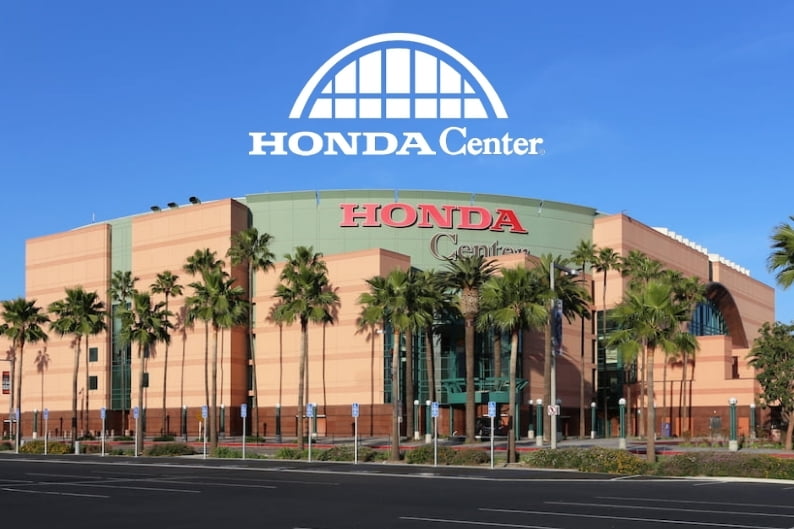 The Honda Center is an impressive, multi-use venue. The Honda Center is owned by the City of Anaheim and hosts the Anaheim Ducks home games and many varied world-class events, shows, and concerts throughout the year. While visiting the area, if you're staying at one of the hotels close to Honda Center, be sure to ask if they offer shuttle service.

The Honda Center is home to NHL Anaheim Ducks. This team was founded in 1993 by the Walt Disney Company; the original name was the Mighty Ducks of Anaheim. The original name inspired the Disney film “The Mighty Ducks,” about a struggling minor league hockey team who became champions. In 2005, Disney sold the franchise to Henry and Susan Samueli. Henry Samueli then changed the team's name to the Anaheim Ducks.

The Anaheim Ducks mascot is a duck named Wild Wing. Wild Wing resembles the duck mask in the Mighty Ducks movie and is much loved by fans. Wild Wing is known for daredevil stunts and is the only NHL mascot who arrives at games by descending from the rafters.

The Anaheim Ducks have won the Western Conference twice and the Stanley Cup once. If you stay at one of the hotels close to Honda Center and Disneyland, be sure to catch an Anaheim Ducks game.

When it's time for a hockey game, a mixture is pumped into over 10 miles of pipes that lie underneath the arena's concrete. The concrete freezes, and a thin layer of water are added and frozen. It takes about 30 hours to set up the ice for a hockey game and about six hours for the ice to melt. The arena can go from a hockey set-up to a concert set-up in about eight hours.

One of the renovations to the Honda Center is the Grand Terrace Project. This renovation added 15,000 square feet of indoor-outdoor space.

The Honda Center has a continuous roster of world-class events that you won't want to miss especially if you staying close by at one of the hotels near Honda Center and Disneyland. You might catch a moderated evening with former First Lady Michelle Obama. Concerts are held by famous recording artists such as Michael Bublé, James Taylor, The Weeknd, Janet Jackson, and André Rieu. The Honda Center also hosts fabulous ice skating events, such as Stars on Ice. Family-friendly events such as the Jurassic Park Live World Tour will thrill and delight.

The Honda Center will be a host during the 2028 Summer Olympics--volleyball will be held at the arena.

While you visit the Honda Center for a hockey game or a concert, you won't go hungry or thirsty. There are dozens of food and drink options, such as burgers, pizzas, salads, nachos, waffles, desserts, and bars. There are also exclusive restaurants available to members and premium Anaheim Ducks ticket holders.

If you stay in one of the hotels near Honda Center and Disneyland, look up their events schedule and see what's happening.